Cloud Optimized GeoTIFF (COG) is simply an intelligent way to store a GeoTIFF file. Or, better defined in the COG web site:

A Cloud Optimized GeoTIFF (COG) is a regular GeoTIFF file, aimed at being hosted on a HTTP file server, with an internal organization that enables more efficient workflows on the cloud. It does this by leveraging the ability of clients issuing ​HTTP GET range requests to ask for just the parts of a file they need.

In this short tutorial, you can find how to create them, and how to read them from a browser or the command line.

Cloud Optimized GeoTIFFs, as explained in the previous section, are organized to be downloaded by parts. When a file os properly organized, the HTTP GET range request (“bytes: start_offset-end_offset” HTTP header) can be used, and only the parts needed are downloaded.

As Even Rouault explains in the GDAL COG page, the structure is:

The easiest way to create a COG is using the GDAL command line interface. If the GeoTIFF data is created from a script using GDAL, it is also possible to do it inside using python or any language with the GDAL bindings.

But, before trying to convert anything, better check if the file is already in a good format and if you prefer using overviews or not.

Create a COG using GDAL from the command line

The basic thing to understand is that the GeoTIFF must be tiled. This is, that instead of writing all the row, the image is divided in small tiles, so only some of them are downloaded. Compression can be DEFLATE or LZW. The first compresses more but is less compatible with some libraries.

This is ok if you want to download all the bands at once, like in an aerial photo. If you have independent bands, or many of them, you may want to download only one band at once. The, you may use the INTERLEAVE=BAND option:

The TIFF format allows to store more than one image, the same way a PDF can store more than one page. This can be used to create the overviews or pyramids. Each overview will divide the image in four from the previous level, so a smaller amount of data can be read. In our case, a thumbnail of a huge GeoTIFF could be easily shown without reading all the pixels.

This is independent of the tiling part, but combining both allows to make efficient files for reading a small part of the image and for zooming out efficiently at the same time.

GDAL has a cli command to create the pyramids called gdaladdo. The command must be run BEFORE the gdal_translate or the resulting GeoTIFF won’t be COG compliant.

This would make four overview images by averaging the values:

The previous section results can be achieved using python directly, which is nice to integrate in the scripts that generate data.

Checking if a GeoTIFF is a valid COG

Even Rouault made a nice python script that not only checks if the file is a correct COG, but also gives some tips to improve the ones that are correct.

For instance, the file in the ObservableHQ example works, but it’s a not valid COG, because of a problem with the overviews. The script output is:

We can easily correct it by running:

Now, the output gives a warning, instead of an error:

So the previous part removed the internal overviews. That’s because we didn’t use the -co COPY_SRC_OVERVIEWS=YES option:

It’s important to create the overviews before transforming the file into a GeoTIFF, or otherwise the order will be wrong and the test won’t pass. It will probably work anyway, but it’s better to go with the specification. There’s a post by Even Rouault with a discussion about this error.

COG can be used to store a huge multi-layer file in the cloud so your scripts can use parts of it, or you can download the part you need to create an interactive map, or use Terracotta to create the tiles directly at AWS uploading only the whole GaoTIFF.

Using geotiff.js to read a COG

The awesome geotiff.js has been adapted to read COG files, which make really easy to use them without thinking about the format.

I learnt how to work with COG and geotiff.js looking at this ObservableHQ example. I’ll try to expand a little the important points.

The first point to understand is that geotiff-js has now many asynchronous methods, because it has to open the file, but also read the different parts of it. Let’s see a small example that just reads a square of 10x10 pixels.

What about the queries? This is the network tab on the developer tools:

We can see three downloads of the out.tiff file:

Note that all the above has been transparent, which is really cool.

An example with RGB

There’s a nice example at ObservableHQ showing how to use an RGB GeoTIFF when it’s cloud optimized.

The interesting part is this one:

An example with numerical data

In this case, the data in the GeoTIFF is a matrix with the numerical values (temperature in our case). The sample.tiff file is big, 26MB, so making the client to download all the data is not an option.

I’m using the marching squares algorithm to show the regions where the data is between two thresholds. You can see a tutorial here.

The output will be like this (all the GeoTIFF coverage): 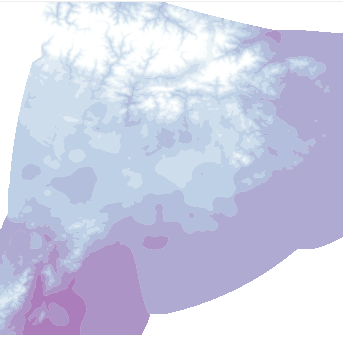 Let’s see another example using the image with the highest resolution, but downloading just a small part using the GeoTIFF capabilities.

The output will be like this (a zoomed portion of the previous example): 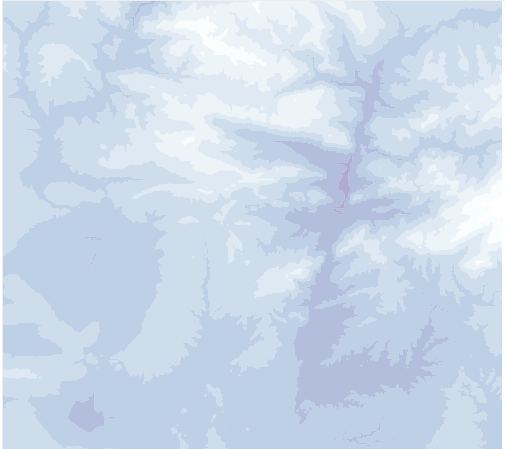 Using GDAL to read a COG

A COG can be read from the command line too! This page explains how. It’s possible, for instance, to get a pixel value by using gdallocationinfo:

This will check the position 5000, 5000 on the defined file, which is located on a remote server. And will use the COG capabilities.

On the explanation page, it’s discussed that using overviews can be faster.

To read a part of the array and store it into a tiff file, use gdal_translate:

Again, this is discussed in the explanation page, comparing which type of file (with/without tiles or overviews) works better.