Some months ago I created a D3js projection, and published it to NMP and Bower. I wanted to use the opportunity to learn about Nodejs, NPM and so on. I write this post to remember all the steps I followed, and maybe is interesting for someone else.

I won't talk about the code itself, but about the tools I used to create it.

To create a Nodejs project, the first thing is installing Nodejs, of course. In the same step, npm will be installed.

The first thing is initializing the project:

This will prompt some questions and save the information into a file called package.json. You can change the file whenever you want, so mistakes are not very important.

This package.json file is important to publish the project, since it holds some information, but also for personal use, because stores the information about the dependencies of the project. You only keep your code, and using the command

all the dependencies will be downloaded.

To add a dependency, one of the following:

Managing the workflow with gulp

A task manager is very useful when working with node. Since I'm not using an IDE like Eclipse or NetBeans, all the tasks are run from the command line, and when the project grows a little, running all the commands can be long. Gulp helps you to do all this automatically creating what they call tasks. The tasks use streams, which are remember me a little the unix pipes.

To install gulp, you have to type:

This will install the dependency at the package.json file.

Now, a gulpfile.js is needed to run gulp. A minimal one would be:

Run it by typing gulp. The task is named default, and is the one run by gulp if no parameter is given. If a task named foo is set, you can run just this one by typing gulp foo. This is useful if there are many tasks and you don't want to run them all.

Gulp has many many plugins, that make almost everything you need to manage your files: testing, minifying, linting, moving, uploading, etc. Each plugin has to be installed using npm install --save-dev plugin_name.

Let's see some tasks from the project gulpfile:

This is one of the most common tasks. It takes several source files, removes the comments, merges them and, finally, minifies the resulting file.

To build again the file, just type gulp build. Of course, usually we want to run several tasks at once, and the tasks have their own dependencies too. Those dependencies are set this way:

This task, that will test the files as we'll see later, requires the tasks 'build', 'buildseparated' and 'get_sample_data' to be run before it starts. It's logical, since no test can be done if the final file isn't built and the needed data is available. I like this method, since you only take care of the dependencies for each task, and the system decides what to run depending on the calculated final dependencies, which can be complicated.

There are several libraries similar to gulp, grunt is the most popular. I chose gulp after looking some comparisons, and because it was the last hype. I'm happy with it, but the others seem nice too.

Using a lint program helps to code better by maintaining a nice code, using a good number of methods in the classes, etc. JSHint is a program that flags suspicious usage in programs written in JavaScript. It can be used with gulp, by installing the gulp-jshint plugin. The created task looks like this:

Which will run for all the files under the *src\ folder (the original ones, with all the comments). Let's see an example, if I change to I'll get messages like: Sometimes, there are errors that you can't (or dont want to) avoid. In my case, I got the message:

Expected an assignment or function call and instead saw an expression

I google it and found a nice explanation and solution, which is adding:

in the function. I didn't change the code, since it was taken from the original Mike Bostock's one, and if he says it's better this way, I won't change it.

Wether you want to use the test-driven developement process or just test some results to your functions so the changes you make don't give wrong results, you need a test framework. Mocha is one of the available ones. It's got a gulp plugin too, so it can be integrated to the project without problems.

First, I made a test directory to put all the test stuff. Then, installed mocha:

Now, you can run mocha from any project, or integrate it in your project. The tests are in the ./tests/test.js file, which looks like: You can create as many tests as you want under describe and sub-tests under it.

In the case of d3-composite-projections, I found two things a bit more difficult to test. One is creating a sample svg file for each projection without using the browser. I explained how to do it in the post Creating maps using D3js and nodejs.

The other is using the created javascript files without including the libraries in the code. Using d3js with node implies requiring it at the begining with require('d3');. But my generated file doesn't have that. I found my solution at Stackoverflow. Basically, you load the modules at test.js and pass it to the file as the context. In my example:

This will allow the functions in composite-projections.js to use _d3 ant the console if necessary.

Mocha can do many other stuff, I have only used a very small part of it.

Publishing the code at GitHub

The code must be published somewhere if you want to share it. The most popular place right now is GitHub, and the other tools will go there to get the code.

You can either clone an existing repository before creating the code

or, if you already have the code, create a repository at GitHub and then: Changing the address to the created repository.

You can now change the package.json file adding the new repository, so NPM can work. In the case of -d3-composite-projections, the lines are:

Note that GitHub has a nice issues page for the projects, and that it can be linked here.

I added many directories at the .gitignore files to avoid filling the repository with temporary files.

Now that we have a good library, we can publish it to npm so other people can use it from nodejs. The first thing is to fill ahe empty fields you amy have at your package.json with the GitHub address, licence, etc. There are some tutorials about how to so it step by step.

I made many errors doing all this (plus changing the Bower version), so I put it into a gulp task:

Bower is a tool to manage the dependencies at a web site. It keeps a track of the libraries and its versions your site depends on. Since d3-composite-projections is intended to be used in a web with d3, it's interesting to publish it at bower so people can use it in their projects. They have a nice tutorial on creating a package. Basically, for this project:

Travis CI is a continuous integration tool that works very well with node.js and GitHub. It builds and tests all your files each time a commit is pushed to GitHub, and can even deploy the changes to NPM automatically only if everything goes well.

The first thing to set up Travis is to create your account. You can do it directly from GitHub, who will ask you a permission. Then, you can take the three steps shown in this image: 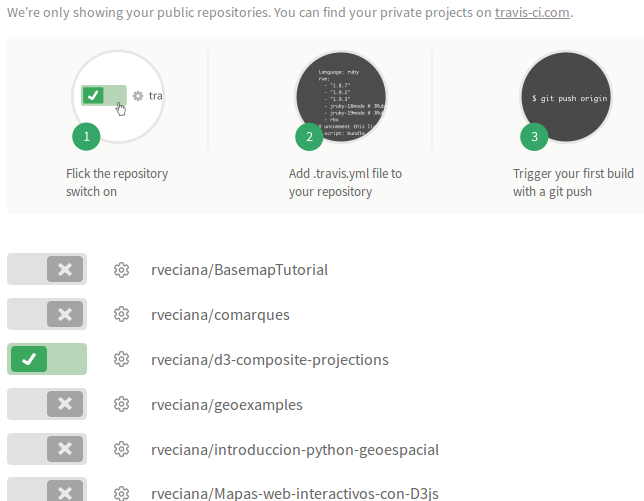 Since I was using a nodejs version higher than 4, this section applies too. It may seem complicated, but the resulting file is quite simple:

To automatize the NPM publication, you can use the travis command line. First, install it using this instructions. Then, just type The API key can be found at ~/.npmrc and must be encrypted with the first command. The second command will add the configuration at your .travis.yml file. You just have to answer the questions. You can find more information in this tutorial. My final deploy section looks like this: The tags: true tag makes travis to deploy to NPM only if a tag has been changed, so other commits I may push will run the tests but won't change anything at the NPM repository.

When you go to the travis project page, you will find a small image like this:

you can insert it into your README.md file or wherever you want so people can know if the last version is giving a good build result.